Boerewors On the Big Green Egg 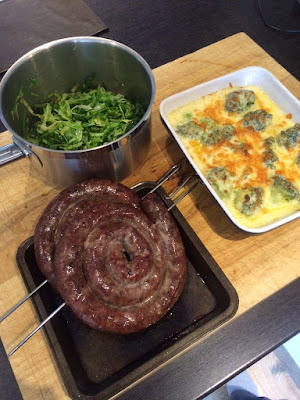 Everybody thinks their butcher is the best right? That's why we use them. The local butcher I use is Joseph Morris in South Kilworth, South Leicestershire. We live in North Northants, so only have to travel 6 miles or so to get to them. There are a couple of butchers closer to us, but none that stand even close to JoMo (the kids updated the name, pretty street huh?!) It's a fantastic business, with 3 sites now, and boast one of the only EC approved abattoirs affiliated to a butchery. I occasionally go to the Rugby shop that has two counters. You turn right to go to the "UK" counter, where you get all the normal recognised cuts of meat that we know and love. However, more fun is to turn left to the "rest of the world" counter. Here, you get the much more interesting meats and cuts favoured by our European, African or West Indian friends. Cuts like beef brisket on the bone, short rib of beef, goat, beef knuckle, pork hock leg, pork collar butt to name but a few. It was while I was there that I spotted about a kilometer of Boerewors sausage. I've eaten Boerwors at a South African friends house that they had made themselves. This was some years ago, but the flavour and texture of that sausage has stayed with me. It's predominantly minced beef, with half as much minced pork, then spices such as corriander seeds, cloves, nutmeg and all spice. The great thing at JoMo, is that you order it by the number of "cricket stump" lengths you want
. I went for 2 cricket stumps, which would serve 4 hungry adults easily. As we are a family of 2 adults and 2 young girls, we had leftovers which were put to great use, which I will write up soon!

I did another "reverse sear" on the Big Green Egg, which can be done easily on traditional BBQ's or conventional ovens and a grill. The butcher recommended I skewered it in to a ring to make turning it over easy without it breaking up. If I was cooking this over direct heat (normal BBQ, over coals or gas) then I would have unraveled it a bit to make sure it all cooked evenly, but with the reverse sear technique, I was able to cook it perfectly in a tight ring. One word of warning, they are quite fatty, so be careful if cooking over direct heat on a BBQ as the fat will catch fire. The beauty of the Egg is that you always cook with the lid closed so the flames are snuffed out. 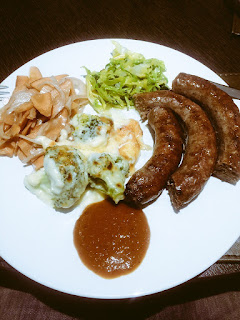 I served the Boerewors with broccoli cheese, braised hispi cabbage and pickled carrot and red onion. The flavour of the sausage is incredible, the nutmeg really comes through and just makes it so comforting. I think next time, I will be ordering a full set of cricket stumps. From both ends of the wicket. Including bails!!!!