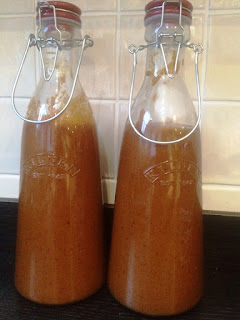 Having tried making many BBQ sauces over the years, and many more recently with my sudden excitement with all things American style BBQ, I have always been unimpressed by the result. To the extent that I resorted to Heinz smoky BBQ sauce as it was completely inoffensive. In actual fact, mixed with a bit of hot chili sauce it was even verging on good...

That was until I bought the book "Hog" by Richard H Turner. I've been a fan of Richard's for a while now having bought the Hawksmoor at Home and Pit Cue Co books, both of which he is involved in. Having made the investment in a Big Green Egg, it seemed a shame to spend hours slow cooking and smoking various bits of animal to then smother it in a mass produced sauce.

So below, is the current recipe from Richard, although he states quite clearly in the book that it is likely to carry on evolving. The ingredients list is extensive and uses large quantities of things like maple syrup and French's mustard. If you buy a standard sized bottle of French's, you'll need to go and get another one!

One final word of warning. Chipotle! I used the amount suggested below, and you end up with one hell of a fiery sauce. Perfect for my taste, however if you want to serve to kids, the elderly, or the infirm perhaps halve or even quarter the amount of chipotle you put in!

Blitz the sauce in a blender, then pass through a fine sieve. The recipe makes about 1.5 litres and will keep in sterilized jars in the fridge for a good while. Makes a nice present as well!
Posted by Unknown at 06:57