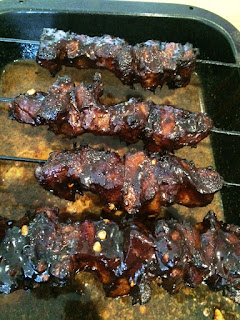 I might have mentioned somewhere that I like pork. Add a sticky marinade, a crispy outside and an unctuous middle and I am pretty much in heaven. If you are also of that persuasion then this recipe is likely to be one that you use over and over again, as I do. It's loosely based on an old Marks and Spencers recipe book (so old that it was branded St Michael, I think it was from the 70s) that my mum had. Goodness knows what happened to the book, but this was the go to marinade when my dad fired up the old barbie.

It's as simple as that! Mix everything together, you should end up with a fairly thick glossy marinade. Use whatever cut of pork you fancy, I used cubed shoulder steaks which you would think would be tough, however I used my newly found favourite way of cooking things like this. Called the "reverse sear".

The Reverse Sear - The technique was developed by J. Kenji López-Alt, who is the culinary director of Serious Eats. He noticed that when searing meat first then roasting, it was very difficult to achieve the same level of "doneness" across the entire cut. Noticed most when roasting joints, the outside would be well done, with the inside really rare, as a result of searing the meat first "to keep the juices in". This theory turns out to be an absolute load of cobblers. You sear the meat to kick off the maillard reaction which is where your flavour comes from. So J.Kenji Lopez-Alt turned the entire process on it's head. Why not cook the meat slowly to begin with to get the meat to your desired stage (rare, medium etc) then give it a good sear at the end to achieve the amazing flavours you get from the blackening and caramelisation that goes on.(To be fair to the French, the Sous Vide method of cooking uses this exact same theory so J.Kenji wasn't really that ground breaking!) You can do this on a BBQ by setting it up for indirect cooking, and cooking at a low temp, then setting it up for direct cooking at a high heat. You could also just as easily do this in a conventional oven for the low and slow part, then whack it under a screaming hot grill for the "sear". Give it a try, you'll soon be converted I'm sure. 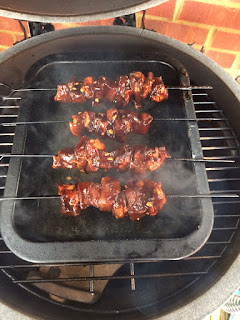 This is the indirect cooking stage. You can just see a large heat deflector in the Big Green Egg under the griddle, that directs the heat around the food rather directly at it. You can do this in a traditional BBQ by lighting the coals, then when they are hot, push them all the way over to one side, and place your meat on the other side with a drip tray, or like I do with skewers over a tray. 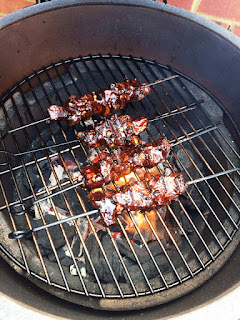 Then, when it's time to sear the meat, put the meat directly on the griddle over the hot coals. 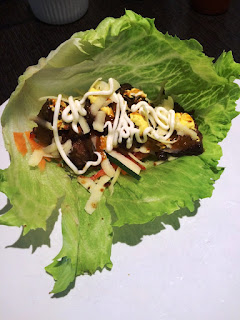 These skewers are delicious served with salad, cheese, sauces etc in tacos or tortillas, however my current favourite (and healthy) way of eating them is like the Koreans do, where they use crispy lettuce leaves as the "wrap". The Chinese do this as well, and they really are on to something!! Here, I used grated carrot, sliced red peppers, grated Parmesan cheese, French's mustard and mayonnaise. The marinade/glaze is a very strong flavour and still comes through wonderfully against all the other flavours that are competing for your brains approval.

I urge you to try this method. It may change the way you cook meat forever!