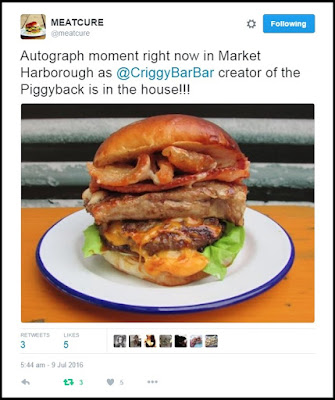 This happened to me three years ago. I was walking past the old Golden Wonder offices in Market Harborough, and in the smeared over windows was a sign saying "Meatcure, Opening Soon". The name was intriguing, not only because of the word Meat, but also the word Cure. What could it be? Was it a restaurant, A specialist butchers, a deli, a bacon shop??

Go to www.meatcure.com and see for yourselves what it actually is. Burgers. Not just any burgers, but proper burgers. You're reading the words of someone who has been to Byron Burger, been to the Gourmet Burger Kitchen, isn't interested in McDonalds or Burger King shite, had various burgers at Red's True BBQ, including the Pit Burger. I've tried burgers pretty much all over the place and not once have I been as astounded by meat patties, a bun, and some other perfectly matched "stuff" as I was on my first visit to Meatcure.

There's a lovely anecdote, where an older couple originally from the UK had moved to Las Vegas. Having eaten burgers in the USA, the true and rightful home of the burger, they vowed never to eat a burger in the UK having moved back here to retire. After much persuasion, they finally succumbed, and have been Meatcure regulars ever since. Now that really is a fine accolade.

So, to the quality. They use meat from the same local butcher that my family and I have been using for over 40 years. They spent months creating the perfect brioche bun in partnership with the company that catered for my sisters wedding. As I was born in Market Harborough, it is wonderful to see such dedication to local suppliers. They make their own sauces which are awesome, and if you can find a better onion ring than theirs, then congratulations, you've done very well indeed.

Anyway. as the business got more and more popular, their Social Media profile was growing. I was also trying to grow my profile and get more people to come and read this blog, so we became followers of each other and engaged in food related banter. At one point, I suggested an additional flavour to pair with one of their existing burgers, to which the response was "why not design a burger for us". Red rag to a bull.

And Lo, the PiggyBack was born.

As you may have noticed, I am somewhat interested in all things Pork, so my design had to include pork in some way. I then came up with the idea of adding a "topping" to any burger, be it beef, fried chicken, or even fish. What I needed was some pork products that would go together to make this topping, that would improve a burger by it's addition. Something that could be added, or put on the back of a burger.....you can see how I ended up at the PiggyBack. I ended up experimenting many times, and ended up with what I thought was perfection. It was bun at the bottom, smoked chili sauce, then lettuce, then tomato, then either beef patty, or fried chicken, then cheese, then bacon, then pulled pork, then puffed pork skin, then mayo, then top bun. 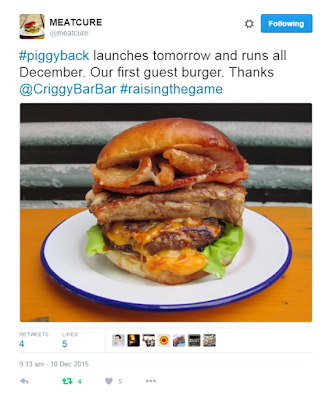 The idea was that the "piggyback" was the pulled pork, the bacon, and the puffed pork. And so the Meatcure chef also started experimenting. They ditched the chicken, as they wanted a burger only, then the pulled pork was uh pulled as it is too common. Then he replaced the pulled pork with what can only be described as a slab of perfectly cooked genius!!! A slice or two of pork belly!!! Have that!! It's my favourite cut, why didn't I think of that??
This is why they are where they are, and I am where I am..... small details create the biggest amount of differentiation.

If you live near Market Harborough, Leicester, Bedford, Leamington, Hinkley and reportedly Rugby in the not too distant future, you owe it to yourselves. The Raging Bull is epic and never fails to satisfy, however if the PiggyBack is on, then it's certainly worth a try. Although I would say that wouldn't I!!