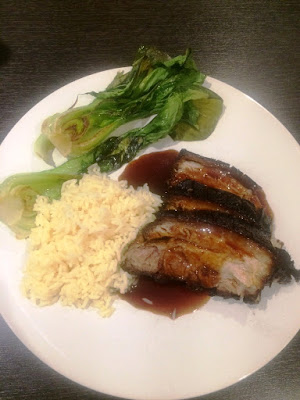 Every once in a while, you have an epiphany. I can't credit my latest epiphany to my own creative juices, but more to probably my biggest hero in the culinary world. Richard H Turner is the man that I wish I was, he's a legendary BBQ chef, a restaurateur of some repute (heard of Hawksmoor, or Pit Cue??), a butcher probably of even more repute (heard of Turner and George?), an author of one of the best porcine cookery books known to man (heard of Hog?), and has forgotten more about pigs than I will ever know!

So, when you buy the latest book from your food hero, (having already devoured Pit Cue Co, my previously favourite book), and you flick through the pages, and then you are forced to STOP!!!! Hold on, I'm sure it can't be, but it looks like I've just flicked past a recipe called "Sticky Toffee Pork Belly"? Really? In all truth, could there ever be a more enticing recipe title than that? Well maybe not for many people, but for me, a self confessed pork freak never before has my excitement been so great at the mere name of a dish. It has everything I want; pork, in fact the belly of said porky beast....my favourite cut; bootstrap molasses, chili, muscovado sugar, more sugar, chinese 5 spice, soy sauce... the list of my favourite things just goes on and on. 2 litres of pork broth, how can that ever be seen as anything but incredible? This was one of those absolutely "must try" recipes, and it had to be served to people that I know would appreciate it. Step forward my wonderful wife, the perpetual size 8 woman who seems to consume thousands of calories with no weight gain whatsoever, and my old friend "posh" Matt, the only man to go to one of the best schools in the country and end up as an estate agent (I know he wont mind me saying that, but his parents and long passed grandparents probably might!). 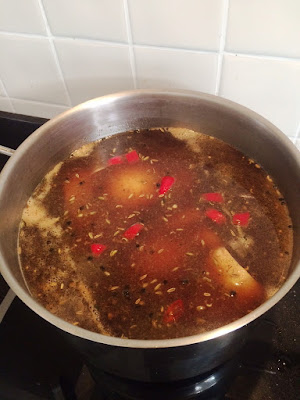 The cooking method is simple. You braise the meat in all sorts of filthy loveliness for a long time, then Richard's recipe says to roast in the oven for 20 minutes. Now, this is where my epiphany kicks in and the final outcome changes for what I think is the better. My thinking, is that the final 20 minutes of oven heat at 220c, could easily be converted to a couple of hours at 125c in thick apple wood smoke to build up an amazing smoky "bark", followed by a final 20 minutes at 220c to get some crispiness going on. This also gave me and Matt plenty of time to muck about with the Big Green Egg, getting the temperature right, while drinking quite a lot of cider. Apples and pork are the perfect match after all! 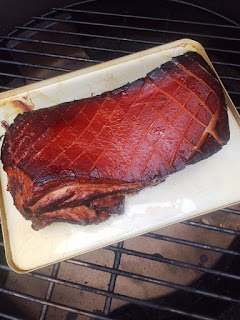 The meat is braised on the bone, which after a few hours in the broth just pop out with minimal fuss along with the smaller gnarly little white bone bits that you see in proper bacon. Pictures to the side and below show the stages of smoking, ending up with a lovely black bark, that looks like burn to the uninitiated, but to those in the know is a massive layer of smoky flavour.

Richard suggests serving with Pak Choi and steamed rice, so who am I to disagree and go against the legend?! The sauce ends up as a really rather disgustingly rich and flavoursome syrup that adds an amazing sweetness and spiciness to the finished dish. I would recommend this dish to absolutely anybody that likes pork belly. One of my previous posts suggests that I am yet to find my favourite way of cooking pork belly. Well, my epiphany is, that I have found it, and will shout about it long and loud!!

Recipe  serves 4, but you might want to use a larger piece of belly

1.5kg piece of thick end pork belly, skin on, bone in. Buy the best you can afford.

For the Brine
I know the point of brining is to retain moisture when cooking meat in dry heat. This recipe involves braising so brining is probably pointless from one point of view, but from a flavour point of view I thought an overnight soak in apple juice, sugar, salt and water couldn't do any harm.

For the Braising Liquid

Mix all the ingredients until dissolved then submerge the pork belly overnight. Rinse off and dry with paper towels.

Generously salt the pork, then leave uncovered for an hour. Given that I'd already brined the meat, I did wonder if this was necessary, however I went with it. After an hour, rinse the salt off.

Put the pork belly in a large saucepan and cover with the pork broth and all the other ingredients. Bring up to the boil then turn down to a simmer. It will take somewhere between 2 and 3 hours depending on the thickness of your piece of belly. Mine took just over 3 as it was very thick. You should be able to push a skewer through with ease, or pop one of the rib bones out with very little resistance.

Remove the meat from the broth carefully, and then pop out all the rib bones and other sinews. They should all come away from the meat easily and cleanly.

At this point, the recipe in the book suggests 20 minutes in a 220c oven, however I went off piste and decided to smoke it for 2 hours at 130c in the Big Green Egg until it was very dark, then upped the temperature to 200c for 10 minutes which gave it a lovely crunch around the edges. I added the olive oil drizzled pak choi to the Egg for the final 10 minutes which came out perfectly with still a nice crunch but a bit of caramelisation.

Strain the braising liquid in to another pan, then boil hard until reduced to a lovely sticky syrupy consistency. Serve with the pak choi, rice and the sauce. Then prepare yourself to be assaulted in the mouth, and then be ready to assault any other diners in order to get seconds! 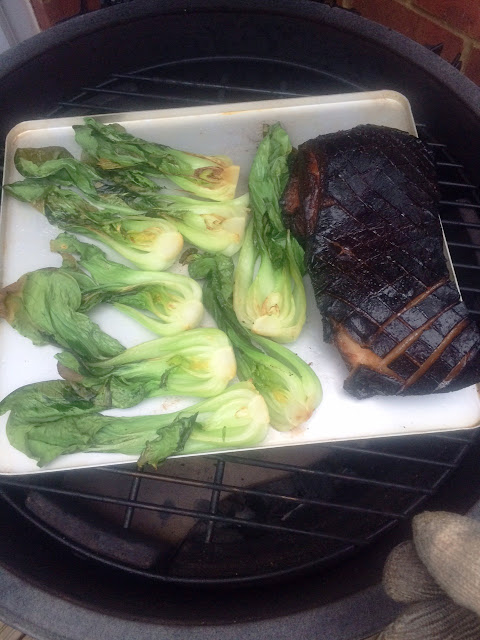