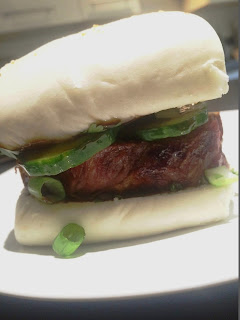 When I told my wife I'd just ordered the Momofuku book, she looked at me with a strange expression. It's not the most instantly acceptable book title to us straight laced Brits (?!?) however once I explained that it was actually the name of a restaurant (at least one) and that the author David Chang was famous for cooking pork belly did she realise that I was serious. My wife you see has come to terms with my pork obsession. Fortunately she is partial to the piggy also, although our early dating was fraught with danger as she was a vegetarian for over 5 years prior to us meeting. She did well though, I think she was tucking in to her first rare steak a good 4 weeks after we starting seeing each other. A lesson in abstinence right there!! 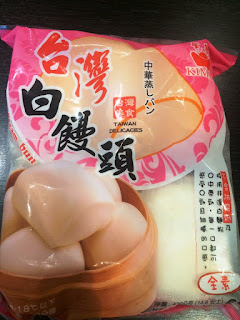 So, to the buns. I've made steamed buns, and the outcome is really very good indeed. It's a major pain in the bum though as you have to prove, then roll in to golf ball sized pieces, then prove, then roll out in to slipper shapes, prove, fold over an oiled chopstick so that it looks like a tongue, then prove, then steam, then burn your fingers many times while trying to prise the two tongue flaps apart in order to fill them with filth. The recipe I use makes about 48 of them, so it does get pretty tedious. If you are faced with a wet weekend with naff all else to do, then it's well worth the effort. However, on a miserable work day Tuesday in July (today) when the sun should be shining, there is an alternative. Some purists may call it cheating, I however call it eating! If you don't cut corners once in a while you will either go hungry or end up eating bland rubbish. I occasionally get an "attack of the buns", and that happened today at about 1pm. Way too late in the day to start making dough with the multiple proves given that we like to eat with the kids between 5.30 and 6pm. Given also that I had not done any preparation in terms of the pork belly, so the whole meal was going to be a quick version. Step in some shop bought Taiwanese Steamed Buns. I've failed in my quest to source said tongue shaped beauties, unless you want to order 500 from one of the frozen food delivery specialists. Instead, I found these buns at Starry Asian Market Online. 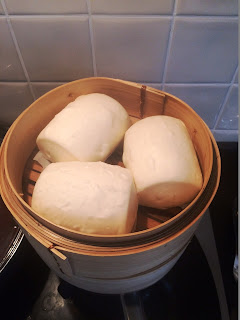 It's a brilliant website, and they stock all sorts of oriental delights that you'd struggle to find elsewhere. Customer service is brilliant, and delivery is super quick. You get stung by about a tenner for frozen food delivery, so ordering in bulk is worthwhile. So, I'm going to cheat today. Will it be any less tasty though? We shall see. 10 minutes in the steamer from frozen. Cheating or not, that's pretty exciting!!


This dish is missing something. Oh yes, filth! As per usual, my first thought under any circumstances when thinking about what meat to cook, is pork. More specifically pork belly. It's kind of like some people's fish fingers or frozen burgers. When you can't think what to cook for tea, I think pork belly. I've always got pork belly, I buy large amounts each time I visit the butcher, vacuum seal it then freeze it. Probably better if it's fresh, but given the amount of salting, brining, marinating, smoking, slow roasting, braising, deep frying, searing and various other torturous techniques I subject the poor fatty cut to, I can't see that it could make that much difference at all. In this instance, all that is called for is moist meat, with a crispy skin and a hint of saltiness. Chang's recipe calls for skinless belly, which I almost can never bring myself to do. Don't get me wrong, if you look at my twitter image, you'll spot dried pork skin that's been deep fried and puffed outrageously. However, more often than not, I prefer the skin to stay on, even when advised to remove by legendary pork geniuses. 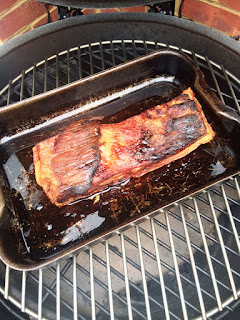 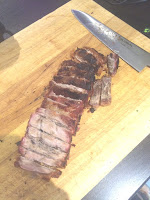 I decided to use the Big Green Egg, as everything I have cooked on it so far has been the best I've ever produced without exception. I salted the meat for an hour (more is better but needs must), then a simple blast for an hour at around 230c, basting with the rendered fat after 30 minutes, then another hour at about 130c, although the temperature for most of the cook was higher than that. It seems that getting a Big Green Egg to drop 100c isn't that straight forward. I ended up putting the "snuffer" on to effectively put the thing out. Even then, it remained around the 130c mark for ages afterwards. As a result, I covered the tray with foil for the final hour. I'd already got a nicely crispy skin. The image shows the belly skin side down which actually helped crisp the skin further. The meat ended up as expected, with a crispy top and bottom, with a lovely moist inside. My absolute perfect range of textures and flavours. You can see the moisture glistening away, with a lovely crispy outer layer. 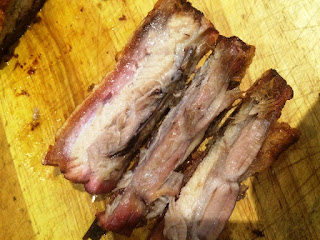 All that remained was to slice some cucumber and drop into a bowl of my universal pickle mix, slice some spring onion, and get the hoisin sauce out the fridge. Seriously, no one expects you to make your own hoisin sauce on a weeknight do they?! I spread both sides of the split bun with hoisin, added some cucumber slices, sprinkled with spring onion, then a sprinkle also of chopped fresh coriander (I love it with pork belly!), then sandwich together and enjoy one of the best mouthfuls of food you can imagine. It's no wonder this flavour combination has made David Chang a legend. If some people want to call me a cheat, then so be it, enjoy your fish fingers and frozen burgers! 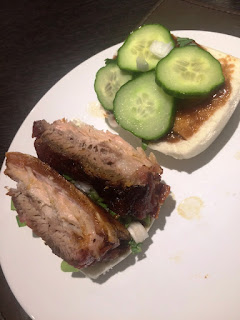 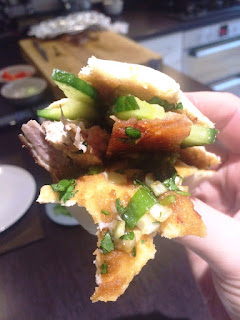