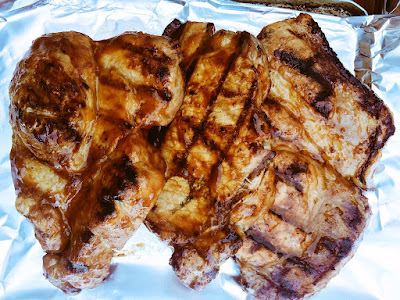 I've been spending rather a long time researching American style BBQ recently, and have been experimenting with BBQ techniques. New techniques that I have fallen for such as the "reverse sear", then of course the classic "low and slow", and am building myself up to try out a "clinch" where you get your coals absolutely red hot, then place your meat (steak, I'm thinking) directly on to the coals. Apparently you get an incredibly crispy exterior, with a hot but moist interior, with very little coal sticking to the meat itself. Another day maybe, still feels scary to chuck top quality rib eye steaks on to red hot coals though!!

Today, for a change, we were having pork. As I've said before, I get my pork from Joseph Morris butchers in Leicestershire. A large percentage of their meat is locally sourced, and slaughtered on site. As such, I'm happy to eat pork from there slightly pink, or "blushing" as some might say. I'd not risk this with supermarket pork. As much as they say they know where their meat comes from, I'm not convinced at all. The horse meat scandal is still very recent, and just shows that the supermarkets trust their suppliers, which is clearly misplaced on occasion, Personally, I like horse meat (medium rare with tarragon butter), however it's the principal that matters here. What staggers me also, and I'll climb down from my soap box in a minute, is that the butchers is LOADS cheaper than the big stores. Better meat, better provenance but you have to put up with spending less of your hard earned to get that sort of quality.....madness! 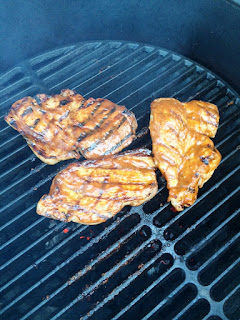 Anyway, all the fancy BBQ techniques aside, a pork steak benefits from direct cooking over a medium to high heat. So, with that in mind I set my BBQ up to about 180c with a cast iron searing grate in place. I had brined the steaks first in 500ml Apple Juice, 500ml water, 4 tbsp table salt, and 4 tbsp muscavado sugar for about 90 minutes. I then dropped them on to the griddle, then before closing the lid I "mopped" them with this amazing BBQ sauce.

I then turned them every 3 minutes, mopping the newly exposed side every time until the internal temperature of the pork was about 58c, knowing that as a result of the high-ish heat of the grilling, after 10 minutes resting the meat would be perfect. 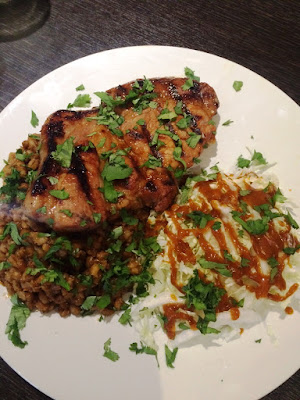 And so it was. It sounds very arrogant doesn't it, that the meat was "perfect"? Well let me assure you that I take no responsibility for that. The combination of the advice found on the Big Green Egg forum in the USA, and the Big Green Egg itself are the reasons behind the successes. So far, I have cooked maybe 15 times on the Egg, and had only one instance of imperfection whereby I didn't smoke my ox cheeks for long enough, and should have then foiled them with some stock in the tray for much longer than I did........ you live and learn. Next time, I'm sure they'll be up to scratch. Everything else has been eye openingly (a word?) good. For someone like me, who has many many bits of kitchen kit, including a sous vide bath, and an 11kw wok burner for example, both of which have provided me many failures. My first attempt at stir frying on the burner resulted in me pouring in some vegetable oil, only for it to instantly and violently ignite. That's one way to season the wok I guess! The Egg therefore  in contrast is such a treat to deal with. I have perfected many dishes in the bath, and on the burner, but with many attempts, whereas the Egg just seems so bomb proof.

I served it with a pearl barley and chorizo stew spiced with cumin, and some finely shredded Chinese leaf, with more BBQ sauce and coriander. I had considered trying to plate this elegantly (not my strong point), then realised that this was wholesome and homely food, so for god's sake, just whack a decent portion on the plates and eat it like a Viking! We used knives and forks so not particularly Viking-ish, but the grunts, slurps and general noshing noises gave a nod to the Norse types! I'm sure they'd have loved pearl barley stew!!
Posted by Unknown at 14:16