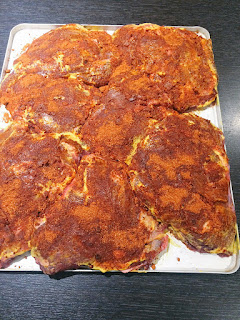 Did I mention that I liked pig's cheeks? Well, I like ox cheeks almost as much! My mum makes a wonderful ox cheek stew; spicy, rich and unctuous. However, being a newcomer to the Big Green Egg, I decided to see what ox cheeks would be like smoked low and slow.

I coated the cheeks in French's mustard, then applied a rub and left overnight in clingfilm.

The rub was a "Memphis" rub from Stephen Raichlen's book "Barbecue! Bible". Really simple to assemble and the provider of a delicious flavour base on which to build the smokey end effect.

Memphis Rub
1/4 cup sweet paprika
1 tbs dark brown sugar
1 tbs granulated sugar
2 tsp salt
2 tsp MSG (Optional. I have MSG in the form of "gourmet powder" but it's not a powder, it's like hundreds and thousands, so I ground it up in my Bamix grinder to a fine powder)
1 tsp celery salt
1 tsp ground black pepper
1 to 3 tsp cayenne pepper
1 tsp mustard powder
1 tsp garlic powder
1 tsp onion powder

Just put everything in to a screw top jar, put the lid on and shake. It will keep for at least 6 months. 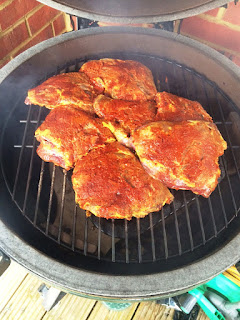 Then it was time to set the Egg going, and attempt to keep it around the 110c mark. After much faffing about closing the top a nano meter, then closing the bottom vent by the width of an ants leg, I got a stable 110c. I dropped some soaked hickory chips in there and left the cheeks to smoke for about 7 hours.

I couldn't help sneaking a peak after about 5 hours and was met by an amazing smoky smell, and decided at this point to start mopping them with some BBQ sauce. The sauce recipe I use is from Richard Turner's book "Hog". It's a wonderful sauce, if a little on the spicy side. If you prefer your BBQ sauce to be a little more user friendly, then halve the amount of chipotle peppers. I however like it spicy so went with the full amount. 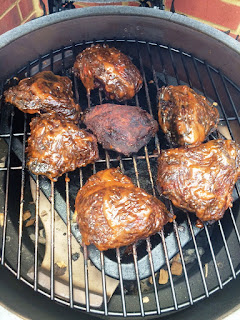 Blitz the sauce in a blender, then pass through a fine sieve. The recipe makes about 1.5 litres and will keep in sterilized jars for a good while. 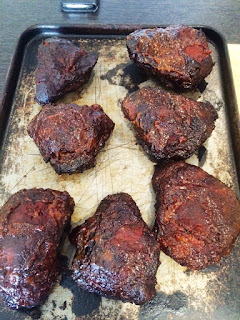 After many mops, the end result looked fairly delicious. The meat was soft and springy to the touch but didn't yield as much as I thought it would. I half expected my finger to go straight through. As it turned out, the meat had a good bite to it, not what I had anticipated but was actually pretty darn good to eat. I think next time, I might braise the cheeks for a while first in a low oven, and then smoke them and add the sticky glaze. 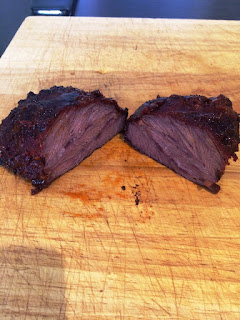 I made a simple sauce of creamed horseradish stirred through some creme fraiche and served with new potatoes from my dad's garden, broccoli and fennel spiced pickled cabbage, with a slurp of that lovely BBQ sauce to keep the taste buds tingling. 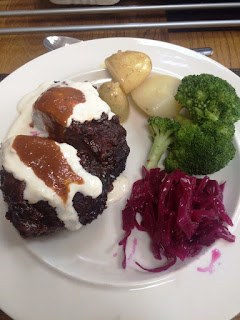 If you look at the picture above carefully, you can see lines of connective tissue still running through the meat. This is what is giving it the bite and slight chewiness (that I found really quite pleasing). Cooking for another few hours might cause this to break down but I would be concerned about dryness. As ox cheek is not an expensive cut, I will be experimenting with a much longer cook, braising the meat first in a low oven, and also will try cooking the meat in the sous vide for a long time first pre-smoke. I'll let you know how I get on!
Posted by Unknown at 08:02