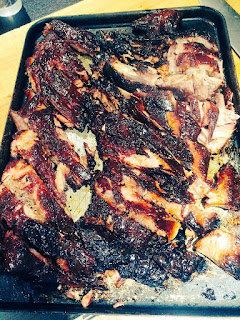 Fitting really that I'm talking about ribs, as I am currently nursing broken rib or ribs following a rather flamboyant, and high speed roller skating accident. I was tripped by a small child who fell in front of me. I must have done a good 20 yards of "will he, won't he" wobbling before finally crashing on to the floor chest first!

Anyway, my woes apart, as long as I can still lift the lid of my Big Green Egg, then I can cope. As such, I thought it long overdue that I slow cooked some pork ribs. It seems to be the thing to do if you look on any American BBQ forum. 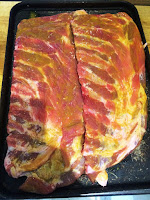 I bought belly ribs from Joseph Morris (surprise). I got them from "the dark side". Not sure why they were over there but who cares, they were big and cheap. I smothered them in a "mustard moisturiser" of about 6 tbsp French's mustard, 6 tbsp water, 1 tbsp Worcestershire Sauce, and 2 tbsp cider vinegar.This idea is from Adam Perry Lang's book "Serious BBQ". He uses moisturisers, seasoning rubs, wrapping mixtures and sauces. Seems a right fag, but the results are worth it all. 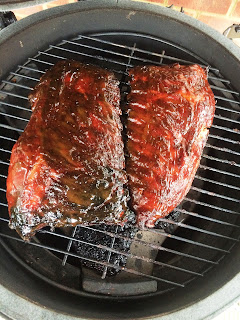 Method
Preheat your BBQ to 135c / 275f, then set it up for indirect cooking. Soak some applewood chips in warm water.
Combine all the mustard moisturiser ingredients and smother the ribs with it. Then combine all the seasoning blend ingredients and sprinkle half of it over the ribs. Place the ribs on the BBQ for 2 hours.
Combine all the wrapping mixture ingredients and cover large sheets of foil with the mixture.
Remove the ribs from the BBQ, and wrap each rack in the covered foil, and crimp the edges. Return to the BBQ for another hour. You can stack them up if you want, but flip them around a couple of times during the cooking.
Remove the ribs from the BBQ and allow to rest still in the foil for 20 minutes.
Remove the ribs from the foil and season on both sides with the leftover seasoning blend, then put back in the BBQ for 30 minutes.
Combine the BBQ Sauce ingredients, and brush the ribs with an even coating of it and leave on the BBQ for another 20 - 30 minutes. Cut them in to individual ribs and serve. We had fried chicken wings, salad and rice and could have eaten both racks of ribs to myself!! 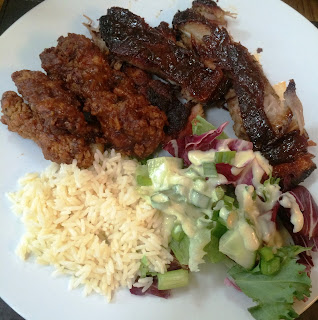