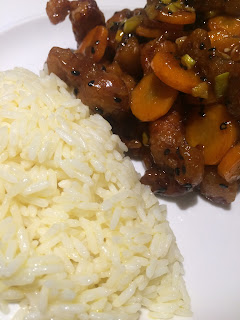 Yes, Pork tonight. Feels like I haven't had any pork for ages.

It is ages, it is 24 hours in total which is plenty long enough for anyone.

Hang on, no, I had a roast ham sandwich courtesy of my mother at lunch time.

Anyway, I used to make Sweet and Sour pork at university using good old Uncle Ben's sauce in a jar. I'd overcrowd the pan ridiculously with way too much meat, inadvertently steam it so that it was a lovely insipid grey colour. Then I'd let all the water boil away, add some more oil and get some colour on the meat, (which obviously completely dried it out), then added the wonderful sauce, full of natural flavours and colours! To be honest, it was actually nicer than the standard tuna bakes everyone else was knocking out using even better quality "Dolmio" sauces!

I then discovered the joys of Chinese takeaway sweet and sour pork. I was brought up in a small village a long way from proper civilisation (places that had takeaways) so my experience of Chinese takeaway food was a little limited. We did have takeaways but usually had what my parents advised I would like, like egg foo yung, chop suey, sweet and sour chicken balls, spring rolls etc. We did in fact eat in a couple of posh Chinese restaurants fairly regularly, the Chung Ying in Birmingham for one which is still going and still has an excellent reputation. Then another in Lutterworth that used to be called the Paper Tiger that was excellent back in the day (we're talking early to mid 80s here). There was also one up in Cheshire near Frodsham I think, near where my parents relocated to. The point I am actually going to make when I eventually get there, is that this was decent Chinese restaurant food where we were spoiled rotten by things like chicken and sweetcorn soup (the lovely stuff with the egg white whisked through it to give that wonderful snot like consistency!), crispy duck in pancakes, and the wonderful Yuk Sung at the Chung Ying which to a young lad was an unbelievable experience. How could lettuce ever be involved in a dish that good?? Takeaway style sweet and sour pork as a result was something I discovered and fell in love with later on in my life, and resolved to make an equivalent version.

This version, unlike my student attempts, uses the deep fat fryer which in my book can never, ever be a bad thing. In moderation (ish) of course. So you coat and fry the pork, make a simple sweet and sour sauce, then add cooked carrots, spring onions and black sesame seeds. It's incredible, even if I do say so myself. This also works extremely well with pork belly that has been braised in aromatic stock, then dried and deep fried. This turns it in to an amazingly decadent dish which is disappointing only in that you can never eat as much as you think you should do, due to the immense richness of deep fried fatty pork belly.

600g pork cut into strips (whatever cut you fancy, I used loin chops which are tender, however I also like using shoulder steaks which aren't tender cooked for this length of time, however you get a nice chew!)
Spring Onions
Black Sesame Seeds
Cooked sliced carrots 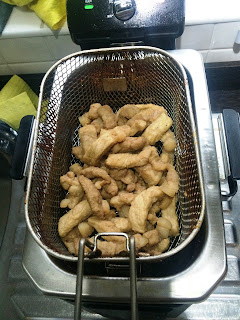 For the pork - Heat a deep fat fryer, or a wok half full with vegetable oil to 180c. Combine all the coating ingredients in a strong freezer or food bag. Drop the strips of pork in to the bag, close the top and give it a right good shake to ensure all the pork gets covered. Deep fry for no more than 3 minutes, then lift out the oil. Just before adding to the sweet and sour sauce, drop the pork in again for another minute to crisp it up.

For the Sauce - Combine all the ingredients in a pan and heat, stirring until thickened to your preference.

If you don't want to make your own sauce, then use 2 or 3 packets of Blue Dragon Sweet and Sour Stir Fry sachets. As mentioned somewhere else on this blog, they really are extremely nice. They have that cloying sweetness then sourness that hurts the back of your tongue, as per the takeaway sauce. Have I sold it to you?! 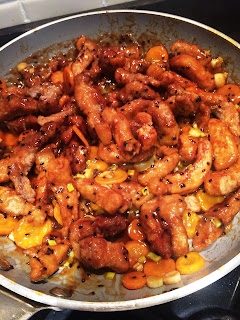 To Serve - Having given the pork it's last 1 minutes blast in the fryer, drop it straight in to the sauce, adding the cooked carrots, chopped spring onion and a tablespoon or so of black sesame seeds. Toss it all together over a high heat until it is sizzling hot. Serve with buttered long grain rice, or make yourself some special fried rice for the authentic takeaway experience! 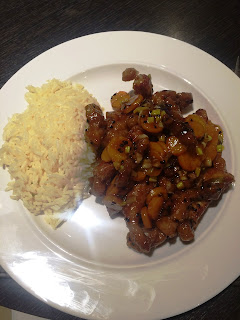